Forensic Patients – Who is Watching Them

In the days of budget cuts and staff reductions for many law enforcement agencies you will often find them contracting out the service of guarding forensic patients. This is not new as most healthcare security professionals will attest to, however the number of agencies using outside resources has increased.

From a law enforcement perspective, if you need to guard a patient, and using a sworn officer will cost you on average of $30-40 per hour, you will consider using a private security company to provide the service for you. For example, many private security contractors often pay a standard wage of $8-12 per hour for their guards, and with company markups they bill out the service at about $14-18 per hour to the law enforcement agency. As you see from that example, the police will save money. Overtime for contract security officers is not normally needed, as the company will provide reliefs for all shifts. Having a sworn officer do this job will normally require overtime, as the officer will usually have a shift with their department either that same day or other days in the week that will put them over 40 hours worked. With regards to finances and scheduling, this can be a win-win situation for the law enforcement agency and the contract security company. But what about your hospital, is it a Win or Lose?

Over the years I have seen police agencies that contract out the service, and then those that do it all with their own staff. Most of the time the decision to do your own patient watch will depend on the criminal charges against the patient and the agency’s preference. For example, the United States Marshall Service will almost always watch their own prisoners. They will take full responsibility for the patient/prisoner’s security detail. On the other hand, local law enforcement agencies are more likely to contract out that service. With the US Marshal’s Service you know the staff guarding the prisoner are well trained and disciplined. However, do you know the same to be true about the contracted security guards? It is incumbent on you to do your due diligence in determining who is working within your facility. You need to know if they are operating within the law, and have clear directions and supervision. Now some may disagree with me and say that that is not their responsibility to do so, as they are not your employees. However, let me explain why it should be standard operating procedure for you to know who is in your facility.

It was found in a healthcare facility that the local sheriff’s department had contracted out the service of guarding patients. They had negotiated a contract with a private security vendor to provide guards upon demand. The guards would be dispatched to the hospital any time the Sheriff’s department requested, and the guards would work until such time that the patient was transferred or returned to jail. Sounds pretty basic so far, but the Sheriff’s representative that negotiated the contract did not know some of the laws that pertain to security guards, and did not understand the hospitals needs.

After receiving several complaints from hospital staff about the guards not staying with the patients, or using DVD/CD players too loud and excessive unwanted socializing with the nursing staff, hospital security got the call and stepped in to investigate. The hospital security program had already complied with the Forensic training as needed to conform to the Environment of Care Standards for the Joint Commission, as the security contractor staff was oriented at the beginning of their shift as required. However, upon making contact and asking the guards to follow hospital policy and noise restrictions, the guards were less than accommodating. When their supervisor was contacted he too was not cooperative. In fact, they claimed to be under contract with the Sheriff’s department and they would only follow their instructions. Although they are under contract with the Sheriff, they are within a private hospital.

Upon further investigation it was discovered that a couple of the guards sent to watch the patient were not licensed with the state, as required by law. It was also found that at least one guard was wearing a sidearm, and a check of the state’s registry found that he was not licensed to do so. So are these issues your hospital’s responsibility to address, or are you exempt from any of the above issues? Some would say it is not my problem, and others would say the opposite, but they are your problems.

If you have a security contractor within your facility that is not licensed, is armed when not permitted by law to be so, and you know about it, you become part owner of the problem. When the above situation happened, a call was placed to the Sheriff’s department by the hospital security director. That call went something like this, (Security Director) we have found that some of the guards that you have working for you are not licensed with the state, and at least one is wearing a firearm but does not have the required state permit to do so. (Sheriff’s Sergeant) What!?! Why does he have a gun with him? Why are they not licensed?

The end result was the hospital barred that security contractor from working within their facility, and the Sheriff’s department had to find a new contractor to guard their own prisoners.

The breakdown here was that law enforcement does not always understand your needs and restrictions, and believe it or not they do not always look for the most qualified vendors. As with most contracted services, the low bid usually gets the job. You do not need to cross the line of the “co-employer” relationship to regulate who will work within your facility. Unless you are a public facility, you do have a say over who works on your property. If you fail to recognize that you have unqualified security guards working within your hospital, and they are armed without justification and licensing, you may face being a party to any litigation that is a result of these factors when something goes wrong.

There is nothing wrong with your security staff checking the credentials of guards working within your facility, as a matter of fact it should be a part of your due diligence process. If a contracted guard is armed, check with the law enforcement agency and private security contractor to determine why, and if they are properly trained. It is the responsibility of the law enforcement agency and private security contractor to know who is working under their authority, and what training they have and what if any permits/licensing they have and/or need. But do not rely on them always knowing that. Work with each agency that brings prisoners to your facility and work out the details well in advance of any issues. Establish a direct line of communication with the law enforcement agency and ask to be a part of their process to hire a security contractor to work within your facility. 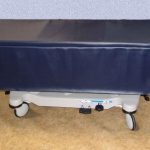