Security Officer Use of Force

Did you know that Security Officers are involved in a Use of Force incidents every 3.44 hours, and that that there was nearly a 300% increase in security officer deaths in 2020, as compared to 2019? [1]

In 2020 there were 76 security officers that died in their workplace from illness, accidents, and assaults, including 43 on-duty homicides, and 252 that succumbed to COVID. [2] I do not know about you, but from what I could tell none of those deaths made the news except in their local news markets. This is an ongoing problem that only seems to be getting worse as time goes on. Add to that the confrontational and violent environment that seems to be at epidemic levels in many large cities, we are almost certain to see more injuries and deaths of security officers.  Update: As of March 13, 2021, since January 1st there have been 22 security officers murdered, that equates to about 1 security officer being murdered while on the job every 3 days.

Security De-Escalation and Self Defense Training

In the case of contract security services, it has been my experience that the security officers receive minimum training, and that is normally only that training that is required by law, if there are any requirements. Contract Security Guard services really cannot afford to write into their contract any additional training because that would cause their contract proposal to quickly become non-competitive. In other words, if they were in competition with several other guard services companies to get a contract, and the others were not including training dollars into their proposals, and  one company was including the costs of de-escalation or self-defense training, they will likely not get the contract if it is based on the low bid. Of course, we know that the low bid normally gets the contract in many cases.

So, if the training is not a part of the contract, will the security contractor do the training anyway? Do not bet on it! Since they are likely generating a very slim margin on the contract, and paying their officers exceptionally low wages, the likelihood that they will spend additional money on training that is not required by law or their client is extremely low.

If an employer is placing security officers in a dangerous environment, or having them work by themselves in an isolated setting, and that security officer has little or no formal training, what can we really expect from them?

Still other guards have told me that they will use the training that they received in the military or when they were a correctional officer and that they could care less about what their supervisors think. When I heard comments such as this at first, I thought that they were just talking tough or being defiant, but talking at length with them it became clear that they were in the survival mode.

So, what happens when security officers go rogue? What is often the case is that when they use force inappropriately, or without authorization, their supervisors will discipline and even terminate them. If a civil litigation case is filed as a result of the use of force, the guard company will likely claim that the person was acting outside of policy and therefore they are not responsible. I would not count on that defense holding up in litigation, especially if the training program used for the security officers is called into question.

So, in essence, if we fail to train the security officers on how to handle potentially violent incidents or an aggressive person that they have confronted, we have no way to predict how they will respond. Plain and simple, their response(s) will be based on their past training, if any, or on whatever they feel is right and justified, even though they likely have very little formal training to support their decisions. If the guard company did not train them, do they really have a right to criticize the officers for acting in self-defense? 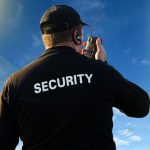